The Creative Spirit (How to Write a Book)

The Creative Spirit (How to Write a Book)

“Where do you get your ideas?”

That’s the question every fan has for his or her favorite author. Stephen King, in his book On Writing, says,

“There is no Idea Dump, no Story Central…good story ideas seem to come quite literally from nowhere.”

I (mostly) agree with Mr. King. Of course I do. What novice novelist would care to argue with a man who’s published over fifty books?

But while I agree with King that there’s no one place to go to dig up bestselling ideas alongside the great authors of the age, I would assert there are many places, truly, any number of places, from which one can draw inspiration. In fact, I believe it’s not so much a question of where you go, but who you go with.

I’d like to introduce you to a friend of mine: the spirit of creativity. If you’ve ever doodled, daydreamed, or gone on a drive with no particular destination in mind, you’ve already felt her nudgings.

I think every author who’s ever contributed anything to life or literature has had an encounter with her, regardless of whether they’d put it in those terms. Madeleine L’Engle described “a bright angel of creativity” as part of the artistic temperament. King himself tells us stories are “found things.” And Justin Cronin says discovering the inspiration for The Passage felt like receiving a “tremendous present.”

So how can you position yourself to receive such a gift? In the following paragraphs, I’ll give you some spiritual, mental, and physical tips to make yourself a target for the spirit of creativity and to harness that energy into the productivity required to write a book.

I often feel the strongest stirrings of the creative spirit not at my desk but in times of prayer. Lest you be tempted to write me off as some super-spiritual mystic, let me draw the general from the specific to illustrate how you can get your creative juices flowing through engaging in any constructive activity you enjoy.

I think prayer stimulates creativity because it’s about releasing positive energy. We know nature abhors a vacuum; apparently the supernatural shares that sentiment. As you impart blessing towards your focus, you’re also attracting positive, creative energy to yourself.

Engaging in prayer or any other constructive discipline is like opening windows and doors on your soul. When you throw back these shutters, you see things in the world outside (and in yourself) you never knew where there. True things. Beautiful things. Things worth writing down. 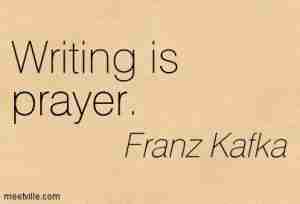 Prayer works for me, but I believe any positive, constructive activity will do the same. The trick is to find what moves you. Maybe it’s fixing motorcycles. Perhaps it’s baking. For some of you, it’s your garden. You could easily find enough inspiration there to fill a series. After all, the bestselling book of all time begins in a garden. But more often than not, you’ll find the influx of ideas and inspiration to be wholly unrelated to your current activity. That’s how creativity rolls: she drives you to distraction.

Once ideas start coming, it’s time to meditate on them. But for me this hardly ever involves sitting. So let’s call it experiential meditation. If you don’t like that, call it a fieldtrip. Still no? Label it living life. Do something that speaks to the ideas forming within you. Walk in the woods at night. Scary. Traverse the halls of a local junior high. Scarier still.

Let the sights, sounds, and smells you experience begin to fill the world of the book you want to write. The more you do this, and the more you invite the spirit of creativity to do it with you, the more you’ll start to view the world in stories to be told. And it’s retroactive. Pretty soon you’ll be seeing how things which happened years ago, things you thought you’d forgotten, add depth and color to your story and characters.

One of the beautiful things about the creative spirit is that it unites what’s inside you and what you experience to produce something totally original. Ernest Hemingway and J.R.R. Tolkien both served in the Great War. Their writings reflect their shared experiences in themes of war and loss, but in very different ways. Hemingway showed us the personal cost of the European conflicts of his lifetime; Tolkien gave us a World War Zero waged in a mythical Europe long lost.

We can’t all be full-time writers, but we can all be full-time people. Relate to those around you in an honest and meaningful way. This will help you develop real characters. Your protagonists should be free to develop both bad and good habits. Their abilities will make them likable, but their faults, and the way they face them, will make them legendary. Give your characters permission to play. Give them room to grow. Allow them to pick up pieces of your psyche and try them on. Let them surprise you; let them do things their way.

Your villains don’t have to be likeable, but you should give them space—in your head and in your novel—to grow larger than life. Nobody would want Hannibal Lecter as a neighbor, but his quasi-mentor relationship to protagonist Clarice Starling in The Silence of the Lambs arouses our sympathy. The fact Thomas Harris took the time to flesh out his cannibal (sorry) has made Lecter an enduring, if not endearing, villain.

Creativity is the bottom line. If the nicest thing you have to say about your hero is that he or she is gorgeous, you run the risk of boring half your potential audience. “She’s so hot,” may be the first thing a teenager boasts about his girlfriend, but it will hardly be said girlfriend’s criteria for choosing a female confidant.

Speaking of a confidant, your head should be a safe place for your characters to converse with you and with one another. Let them speak to you without feeling the need to blab everything they say into the text of your novel. Some of it should sit silently between the lines.

Let’s recap: channel, meditate, make friends with the voices in your head. Don’t worry, that’s as esoteric as I’m going to get. Now let’s talk about the nitty-gritty of getting words onto the page.

The more creativity becomes a lifestyle for you, the less you’ll struggle with writer’s block. I have the opposite problem. I have more ideas than I have time to write. What I do struggle with, and what I believe most of what we call writer’s block can be blamed on, comes down to two very dirty words: perfectionism and procrastination. Hopefully, the following tools will help you hurdle both.

First, set a word count, meaning a quota of words to write each day. It doesn’t matter what the number is, just decide on one; then do whatever you have to in order to keep your commitment. Pep talk yourself in the mirror each morning. Swear a solemn oath on Abraham Lincoln’s tomb. Better yet, just keep a silent resolve to do it. A word count is to an author’s productivity what the head shot is to killing zombies. It’s not the best way. It’s the only way. Telling yourself you’ll write for an hour each day is a delusion. You could pass the whole sixty minutes staring at the keyboard. (Please don’t ask me how I know this.)

Like any routine, having a set time each day will make this easiest. But if that’s not possible with your schedule, the word count will again prove invaluable in keeping you accountable. If it’s 10pm and you haven’t reached your quota, you’ll know you need to skip the Late Show and hit the keyboard. Like any exercise, filling your quota will become easier the more you do it, and it will come with a feeling of satisfaction every time you do. Completing a word count six days a week, I knocked out a 100,000-word draft in two months and had a blast doing it.

And when it’s time to write, disconnect your computer from the internet. Otherwise, Facebook and Youtube will seem exponentially more exciting than hammering out your quota. Or, if you’re like me, you’ll hop on Wikipedia because your next plot point hinges on whether or not platypuses have nipples—and you can’t remember learning that, or anything else so crucial, in freshman bio. Before you know it, you’re reading about water birth clinics in the Bering Sea. There are no platypuses, nipple-less or otherwise, in the Bering Sea. Trust me, I just checked on Wikipedia.

Keep your writing time about writing. Research platypus anatomy, and everything else, later.

Perfectionism will try to paralyze you despite your best intentions. Just remember something: since the time of the Reformation, Catholics and Protestants have agreed on one thing: perfectionism is the devil. He’s the arch-nemesis of creativity. Just let what’s running around your brain escape onto the page.

Who cares if it makes a bigger mess than Godzilla touring Tokyo? You can clean it up later. And don’t forget our rule: constructive activity begets creativity. You’ll be surprised at the doors your characters open up once you take the plunge of putting those personalities down on paper. As L’Engle said, “Inspiration usually comes during work rather than before it.”5

There’s no doubt about it: writing is the hard part of writing. (Yeah, you read that right.) Thinking about writing and having written are usually more fun than writing itself. Writing a book means soldiering through days when you feel like what you’ve produced is only good for lining the bottom of your canary’s cage.

Writing can be painful, but so is giving birth (or so I’ve been told). But both are beautiful. Because putting words on the page is the process by which you bring what’s begun in your spirit into physical being. You’re creating ex nihilo. It’s pure magic, pure alchemy. You’re turning air into gold.

Of course, you’ll have to pass through the refinement process of editing and the minting process of publishing to turn it into real gold. But that’s the downhill stretch. If you’ve gotten this far, I know you’re going to do great.